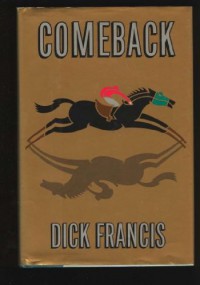 I've never read a book by this author and I must not have thought I'd like it because I kept putting off reading it.  This book has been on my "to be read list" for years!  I recently joined a group in the discussion threads at Paperbackswap.com called This Book Has Been on My TBR Long Enough.  They start a new thread each month and everyone digs out a book that has been languishing around for the longest and commits to reading it. Many times we find the book was a lot better than we expected it to be.  This is true for my pick for May.

I thought this was a good book even though it took me a bit to get used to the different British lingo. I guess I haven't watched enough BBC TV. Peter Darwin works for the Civil Service and is given a new assignment in Gloucestershire, England where he lived as a child. His mother worked as a secretary at the horse races then so he grew up around them and had wanted to race himself one day. He is interested in seeing his old neighborhood again. He befriends a man there named Ken that is a local Vet and surgeon to the racehorses. He confides in Peter that he is worried about his reputation because recently several horses have died unexpectedly during or after surgery. As Peter begins to learn more about this mystery he is also recognizing names and places from when he was a child. Things begin to get more serious when part of the Vet clinic burns and a body is found inside. More horses die mysteriously and Peter has to figure something out fast before there is nothing left of Ken's career.

I noticed that Peter is quite the ladies man although there aren't any sex scenes. Even the woman that was described as being less attractive or built like a man with fuzz on her lip etc was someone he was attracted to. This is a minor part of the story.  There are a few f-bombs but not a lot.