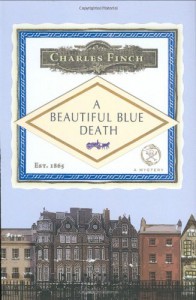 This was a good cozy mystery. Charles Lenox doesn't have to work because of his status but he enjoys a good mystery. He is asked by a friend, Lady Gray, to look into the death of a young girl that had been one of her maids. The girl recently went to work at another house and three months later was found dead. The owner of the house was sure it was suicide but no one else believed it. Lenox decided to take on the case but the owner of the house and the police shut him out.  Lenox has to ask questions carefully since he wasn't officially working with the police on the case.